Her opera roles include Violetta in “La Traviata,” Fiordiligi in “Cosi Fan Tutte,” Elizabetta in Amato Opera's “Don Carlo," and the Mother in “Amahl And The Night Visitors."

Her musical theater roles include Louisa in “The Fantasticks" and leads in “Evita,” “The Sound of Music,” and “The Music Man,” garnering 3 Woodminster Amphitheater Best Actress Awards.

Miller's recordings include her self titled solo album of songs and arias “Valerie," an operatic aria for Tom Cruise film “All The Right Moves," and her single "Angels," #6 worldwide on the New Age Vocals chart.

A Northern California resident, Miller has taught at Stella Adler Academy of Acting in Hollywood and currently teaches singing, voice, and acting in her private studio in the San Francisco and Los Angeles areas.

She is a member of NACUSA, AGMA, Actors Equity, SAG/AFTRA and has studied composition with NEA recipient Dr. Beverly Grigsby. valeriejmiller.com 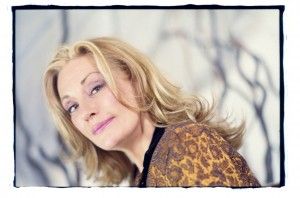 Valerie Miller, award-winning singer and actress, began her performance career at age four, her astonishing spinto soprano voice having revealed itself by age two. She has been performing professionally ever since, and is equally sure-footed in the worlds of the opera, the concert and dramatic stage, recording, musical theater, film, and television. In the opera she has performed such roles as Violetta in “La Traviata,” Fiordiligi in “Cosi Fan Tutte,” and the Mother in “Amahl And The Night Visitors,” among many others.

Her musical theater appearances have included starring roles in “Evita,” “The Sound of Music,” and “The Music Man,” roles for which she won 3 Best Actress Awards from San Francisco’s Woodminster Amphitheater.

Valerie studied voice and drama and was graduated from Interlochen Arts Academy with honors, then attended Manhattan School of Music, both on full scholarship, where she studied with Daniel Ferro, and later coached with Beaumont Glass at the Zurich Opera, in Switzerland. She studied acting with the legendary Miss Stella Adler, with Mary Carver, and by Miss Adler's special invitation, with William Chow of the Peking Opera, renowned as China’s premier actor prior to the Mao era and known for his realism in acting. She was also a scholarship recipient from the Los Angeles Fine Arts Council.

Among Valerie’s recordings are her self-titled CD “Valerie” and her performance of an operatic aria on the soundtrack of the Tom Cruise film, “All The Right Moves.” She has also performed as guest lead vocalist on the CD “Love Journeys,” reaching #6 on New Age Voice Magazine's Vocals Chart. Her performance as Violetta, in Verdi’s “La Traviata,” will soon be available on DVD.

The ever-expanding scope of Valerie’s work ranges from musical theater, to the opera, to her recent performances of contemporary art songs, inspired by her own study of composition. Her performances encompass roles as soloist in the San Francisco Symphony Pops Series concert “Cole Porter On Broadway,” Elizabetta in Amato Opera’s “Don Carlo,” and Louisa in “The Fantasticks.” Valerie’s fluency across diverse musical and dramatic styles is the result of a creative need to learn and to grow. Unifying the work are her exciting, burnished soprano sound, her power to communicate through performance, and a conviction that a solid dramatic and vocal technique give the performer the confidence and ability to fulfill the role.

After settling in Los Angeles Valerie taught at the Stella Adler Academy of Acting, in Hollywood. She later opened a private studio where she teaches singing, voice for the actor, acting, and audition classes to industry professionals in both the San Francisco and Los Angeles areas.

Valerie has found a comfortable home in Northern California where she performs regularly. She continues to teach and perform both in the Bay Area and in LA, combining a joy of teaching and her own artistic output, two areas of sharing that are never far separated in her creative life.

Valerie is a member of NACUSA, CSA, AGMA, Actors Equity, and SAG/AFTRA.

She has studied composition with National Endowment for the Arts recipient Dr. Beverly Grigsby. valeriejmiller.com